Run an internet search for cryotherapy and you will see many celebrities and pro athletes touting the benefits of this treatment. From athletic recovery to anti-aging, the advertised benefits keep growing, and it seems the whole country has now hopped on the arctic bandwagon.

While it sounds exotic, cryotherapy is simply the use of low temperatures to provide physiological benefits. In the 1970s, whole body cryotherapy (WBC) was developed in Japan as a method of treating rheumatoid arthritis and multiple sclerosis. It involves the immersion of the body in a cryotherapy unit, with only the user’s head outside of the chamber. The chamber is then cooled using refrigerated air or liquid nitrogen. Popular in Europe for several decades, this treatment first gained acceptance in the U.S. about 10 years ago, when elite athletes began using it as a less painful alternative to ice baths to reduce muscle aches and speed recovery. Cryotherapy has now entered the mainstream and is widely available at health spas and sports rehabilitation centers across the U.S.

WBC treatments occur at temperatures as low as -300 degrees Fahrenheit and last from one to four minutes. The extreme cold activates the central nervous system and results in the release of adrenaline and endorphins, leaving users reportedly feeling refreshed and re-energized.

WBC equipment consists of a standalone chamber attached to a DOT4L liquid nitrogen cylinder or microbulk vessel. The nitrogen enters the chamber/coolant system in its gaseous state and is used at a rate of about 8 to 10 liters per session, including the unit precool/pressurization period.

WBC hoses should be vacuum jacketed to avoid condensation puddling and maximize equipment efficiency during the cooldown period.

In addition, the use of liquid nitrogen in an enclosed space requires the installation of an exhaust fan ventilated to the outdoors. A typical ventilation rate is 1 cubic foot per minute per square foot of room size.

The unit must maintain pressure within a given range in order to operate. A typical operating pressure range is 18 to 60 psi, depending on the equipment manufacturer.

A typical DOT4L liquid nitrogen cylinder is equipped with a pressure relief valve that is set to open when the system exceeds the maximum safe operating pressure. “A traditional safety relief device will relieve the excess pressure rapidly, causing a decline in pressure, and then the tank has to build back up to the desired set pressure, which will result in a pressure fluctuation that is outside of the prescribed pressure range,” said Brent Lockhart of Ratermann Manufacturing.

To counter this issue, Ratermann offers DOT4L liquid nitrogen cylinders and microbulk tanks that have been customized to meet the needs of WBC systems. These tanks include secondary overpressurization regulators and pressure-building regulators that work in unison, and are plumbed and preset to deliver pressure according to the specifications of the cryotherapy equipment manufacturer. The overpressurization regulator allows the system to slowly weep excess pressure as it ramps up, rather than dumping it all at once when it exceeds the system’s maximum pressure setpoint. “For example, if we have a pressure-building regulator set at 18 psi and the pressure-reducing regulator set at 25 psi, we will then supply a constant pressure that is between these two pressure settings,” Lockhart explained.

Careful pressure regulation also helps to optimize nitrogen use. Operators charge between $40 and $90 per treatment, depending on the market area and/or subscription pricing, resulting in large margins that contribute to the popularity of this enterprise. Most operators complete about 20 to 25 sessions per day, so that amounts to a nitrogen use of 160 to 250L per unit each day, or approximately 4,000L per month (or more), making cryogenic operators a significant customer.

Exposure to the extreme temperatures in cryotherapy chambers has resulted in several cases of frostbite injuries (typically as a result of damp skin or clothing) and one reported death. In October 2015, a Nevada cryotherapy spa operator was found dead in a cryotherapy chamber after apparently using the equipment by herself after hours. The coroner ruled that she died from asphyxiation.

“When in use, oxygen levels inside the chamber can drop to less than 5 percent,” the coroner said. “Breathing air with this low level of oxygen can quickly result in unconsciousness and then death.” Following this incident, the state of Nevada released safety recommendations for the use of WBC equipment, including hazard communication training for operators, nitrogen monitors in treatment rooms and waivers for users outlining the risks and contraindications. It has not been established how compliance will be monitored or whether other states will establish similar guidelines.

Cryotherapy equipment manufacturers have responded to safety concerns by installing a number of new safety features in the equipment. These include dual-fingerprint operating systems that require both the operator and the user to scan his/her fingerprints in order to run the equipment, user pulse-oxygen sensors and head sensors that turn the unit off if the user’s head enters the chamber.

Some manufacturers have gone a step further by eliminating the asphyxiation hazard entirely. Rather than exposing the user to liquid nitrogen, the chamber air is refrigerated using an indirect liquid nitrogen coolant system.

Karl Benn, director at Cryopod, Inc., spoke of the steps his company has taken to ensure the safety of users. “We have partnered with world-class engineers with the aim of eliminating the safety concerns of cryotherapy,” Benn said. “Unlike direct cryosaunas that use nitrogen to cool users directly, Cryopod utilizes a heat exchanger, thus the client is only ever standing in super-cooled breathable air.”

In addition to WBC, cryotherapy facials are becoming increasingly popular at cryotherapy centers and spas. These portable units typically house a small nitrogen tank and include a handheld wand that is used to apply vaporized liquid nitrogen in circles around the face and neck. Purported benefits include reduced inflammation, exfoliation and increased collagen production. Potential hazards include frostbite due to the proximity of liquid nitrogen to delicate mucous membranes.

There’s also a cryotherapy wrinkle treatment known as Frotox that is gaining popularity. Advertised as a toxin-free alternative to Botox, which is an injection of the neurotoxin botulinum to temporarily paralyze the nerve cells that reveal wrinkles, Frotox uses a highly pressurized stream of liquid nitrous oxide through a closed-end needle. The liquid changes into a gas at the needle tip, and this change of state absorbs heat energy and freezes the nerves for up to four months. Because the tissue is exposed only to the cold and not the introduction of a toxin, Frotox is considered less hazardous than other wrinkle-fighting injections.

Cryotherapy is a retail market that has special considerations for gas distributors. Unlike industrial users, who are likely to have extensive safety training in gases and equipment, retail operators are often unaware of the precautions for the safe use of liquid nitrogen and other gases. AWISCO President Lloyd Robinson discussed some of the important considerations when serving cryotherapy businesses.

“It’s incumbent on us as distributors to train end users,” Robinson explained. “Don’t expect the equipment manufacturer to train on our products — the manufacturer just wants to sell the equipment. Our job is to make sure that the tank gets delivered and the operator knows how to hook it up properly and safely in a well-ventilated area.”

Another important area of concern is educating cryotherapy customers on expected usage rates. WBC units use nitrogen during both the precool process and the actual therapy session. While the session usage remains relatively constant regardless of how much time has passed since the previous session, the precool time and nitrogen usage varies significantly based on the time between sessions, a fact that can confuse new cryotherapy customers.

For example, a typical cryotherapy unit has a posted usage rate of 1.5 liters for the unit precool, but that data assumes only 5 minutes between sessions. It’s important to let customers know that the same unit might require 3.5 liters for precool if the sessions are spaced at 30 minutes apart, a much more likely scenario. The longer precool is required to cool the supply hoses and hardware back down to cryogenic temperature and supply a liquid rather than a gas. The product will remain a gas until the temperature drops back down to -320 degrees F, and the amount of time this takes will vary depending on how long the liquid cylinder has been idle, the ambient temperature, the type and length of supply hose and other variables.

In addition to the chamber cooldown, cryotherapy chambers must maintain a specific operating pressure, resulting in additional nitrogen use between sessions. “If the equipment is off for a few hours between customers, it loses pressure and you sacrifice some product to bring it back up,” Robinson explained. “We try to let customers know that nitrogen use may be 30 to 50 percent higher than stated by the manufacturer to account for the equipment cycling between uses. You need to train the operating techs to turn the pressure builder off when the equipment is not in use.” 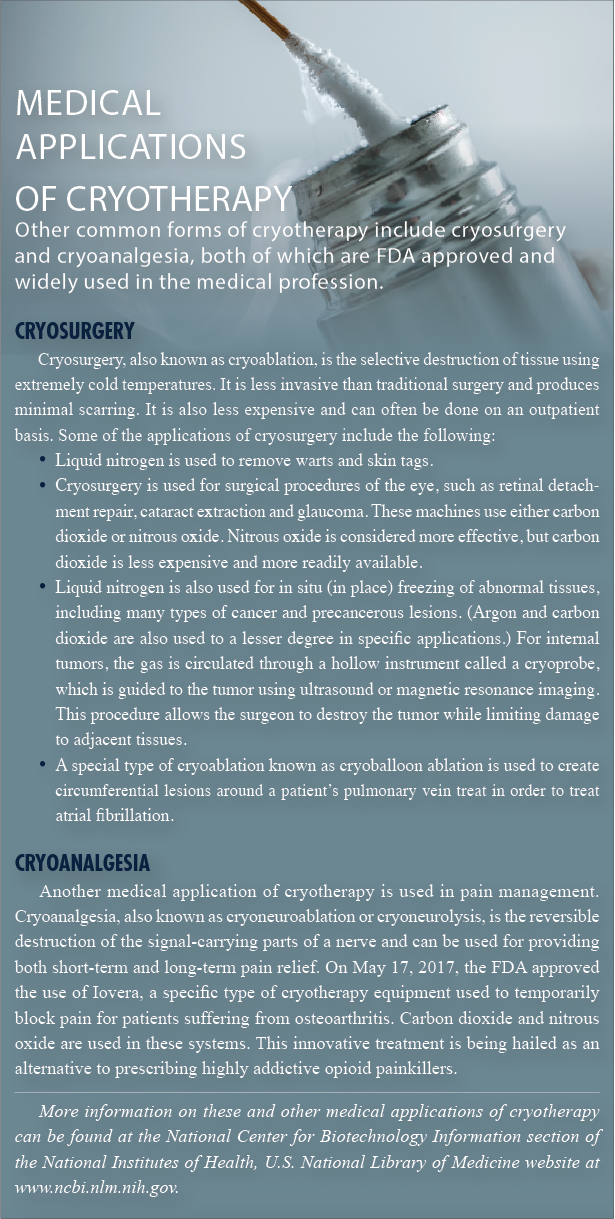