One of the largest trends in American consumerism is the rise in direct to doorstep food delivery services. Companies like Blue Apron and Hello Fresh are popular meal kit services and now even Amazon is promising two-hour grocery delivery. As Americans get busier and the “Amazon Effect” continues to take hold, more and more we’ve grown accustomed to being able to get goods brought directly to our home at the click of a button without ever having to leave the couch. According to Statista, the fresh-food meal kit industry was valued at $4.65 billion in 2017. By 2022, it’s projected to more than double, reaching $11.6 billion.

An unsung beneficiary of this consumer trend is the dry ice market.

There are four main types of dry ice: pellets, rice, snow and blocks. Each has a different application and is used in different markets.

Blocks – According to TOMCO2 Systems VP of Business Development Bill Wiggins, dry ice blocks can be traced all the way back to the 1930s. “Prior to companies having liquid CO2 systems, companies just made block dry ice. Those were typically made and shipped in rail cars,” he says. “Once it got to its destination, that dry ice would be used for food preservation or vaporized and used for the bubbles in cola.”

Today, blocks are used very similarly to how they were in the 1930s, with big blocks cut down into smaller 10 pound or smaller blocks and used in food shipping. “You get a high density block that is convenient for shipping,” says TOMCO2 Systems VP of Sales & Market Development Jeff Holyoak. “It will sublimate slower than pellets so your shipment has a 5-7 day hold time and you still have fresh meat when it gets to you.”

Pellets – Pellets are also used in food shipping but not in the same way that the blocks are used. “As the market grew in the ‘70s, instead of making a 55-pound block of ice, which typically was cut up in smaller pieces, that’s when pelletizer machines were developed,” Wiggins says. “The machines made pellets ranging from ¼ inch in diameter to ¾ inches. And then those pellets would be primarily used in the food industry to scoop pellets onto a box of poultry or beef.”

In addition to food shipping, the pellets are also used in the medical field for shipping specimens, organs, blood or pharmaceuticals. It can even be used in food production.

“The process of grinding pork to make sausage generates a lot of heat,” Wiggins says. “So, to keep that temperature of the meat from rising, you add dry ice to keep the heat out.”

Snow – Snow is used very similarly to the pellets. As the name would indicate, snow is a finer form of dry ice than the pellets or blocks. “It’s more a of a misting and layering agent,” says Holyoak. “You can interlay it throughout the entire package and obtain greater surface area coverage.” That way, you get more consistency all the way through the box. If it’s meat, the meat in the middle of the box is the same as the meat on the outside, as far as temperature retention.”

Rice – Dry ice rice is the most recent and arguably most consequential innovation in the product. “In the 1980s, when the concept of dry ice blasting was developed, machines were developed to make smaller pellets, typically 3 millimeters or 1/8 inch, also referred to as rice,” says Wiggins.

Dry ice blasting is similar to sandblasting. According to a blog article by Interstate Carbonic Enterprises, “There are many different forms of blast cleaning that can provide a range of finished product, toxicity, waste, and levels of safety. The most common type of blasting that people think of is sandblasting, which uses an abrasive media. It is commonly used in numerous applications, particularly in paint and rust removal of sheet metal applications. Alternatively, dry ice blasting is a non-abrasive media that provides the same qualities without some of the expected leftovers.”

With dry ice blasting, there is less concern about damaging the material that you are cleaning. With an abrasive like sandblasting, you run the risk of damaging the surface by scraping or scuffing it up. Dry ice, as a nonabrasive, will not damage those products. And because it is not a liquid and sublimates on contact, it is safe to use around electrical components.

Dry ice blasting was originally developed by the military to strip the paint off military aircrafts. Today, due to its nonabrasive and non-toxic nature, it is also used in food production facilities and in industrial environments, and is ideal for removing oil and grime.

“It’s not as aggressive as sand, but it’s more aggressive than water blasting,” Wiggins says. “Bakeries, for example, use it to blast cookie dough off the conveyor. There’s no residue and it’s completely safe to use around food.”

Things to Know– Dry ice is undoubtedly a growth market. A study by Research Nester concludes that the market will continue to expand at a Compound Annual Growth Rate (CAGR) of 6.8% over the next ten years. However, before making the investment into dry ice production or distribution, there are some things to keep in mind.

Losses – Dry ice will sublimate at a rate of 5-8% per day, depending on the insulated containers it is stored in, according to Wiggins. That means that, ideally, the product should be made, delivered and used all within 1 to 2 days. It is not a product that can be stored long-term.

“It’s a different product because it’s perishable,” says Dunn. “You can’t make it and put it on the shelves. That creates challenges in production. The majority of customers want their ice fresh on Monday mornings. So, it’s a bit of a challenge.”

Regional Product – Because of the losses that it can incur, dry ice distribution can be more regional. If you’re in an area with a high concentration of meat or poultry producers, it may be a market that would make sense for your company.

“We’re not in a heavy area of research and development or pharmaceuticals,” says Dunn. “But we’re also not necessarily a big food manufacturing town. You have to find out where the demand is. Like down south, there are a lot of chicken and meat producers. There are areas of the country that are more seafood producers. They might have different demands than the customers in our area.”

Safety – Dry ice is a very safe product when the safety best practices are followed. However, many dry ice customers are not well-versed in the gases industry and may not be aware of what those best practices entail.

“It’s important to educate customers on the inherent safety risk,” says Dunn. “A lot of people aren’t really naturally exposed to the potential danger. So, it’s important that the distributor educates all of the customers on things like not touching it, not putting it in their drinks and not keeping it in confined spaces.”

The biggest safety risk is asphyxiation.

“When dry ice sublimates it becomes a vapor,” says Wiggins. “When the vapor is allowed to accumulate in a confined space or a closed room, it can be very dangerous. So, any time they either use or store dry ice, they have to be very careful to prevent any build up of CO2 concentrations. The depletion of oxygen is an asphyxiation concern.”

Cee Kay just completed their fifth year of dry ice manufacturing and distribution. “There are a lot of ways that you can get involved in this market,” says Dunn. “You don’t necessarily have to make it yourself. You can buy it and resell it. You can start with a very small machine and test the market. You don’t have to jump in all at once.”

Dunn cautions that as a distributor, there are certain disadvantages when going up against major dry ice manufacturers.

“There are major suppliers in the industry that have huge scale facilities tied to ethanol plants and CO2 manufacturing plants,” Dunn says. “And they can distribute over long distances. There are more efficiencies that they have. They’re at a significant advantage when it comes to cost. We have to be more of a local, same day or next day service. And we have to compete on service.”

He adds, “There are different business segments and industries that are using dry ice now. There’s a diverse demand. And a lot of times, the customer is somebody that you’re already selling gases to. So, you already have that relationship. But there are also new businesses that you wouldn’t necessarily deal with that also buy dry ice. It’s a good little niche.”

Holyoak and TOMCO also see the dry ice market as a growth vehicle, both for manufacturers and distributors.

“We talk a lot about food processing, but that’s a volume market,” he says. “Because of the volume, you get highly competitive pricing. I think for our gas distributors at the individual retail store level, it can be a great profit generator. They get much higher prices for off-the-street, on-demand ice for general users. People use it for hunting, fishing, camping, etc. They can get great margins off that ice on a daily basis and it’s also generating traffic to the retail stores. It’s a great opportunity to diversify the product portfolio in the retail store for the gas distributor.” 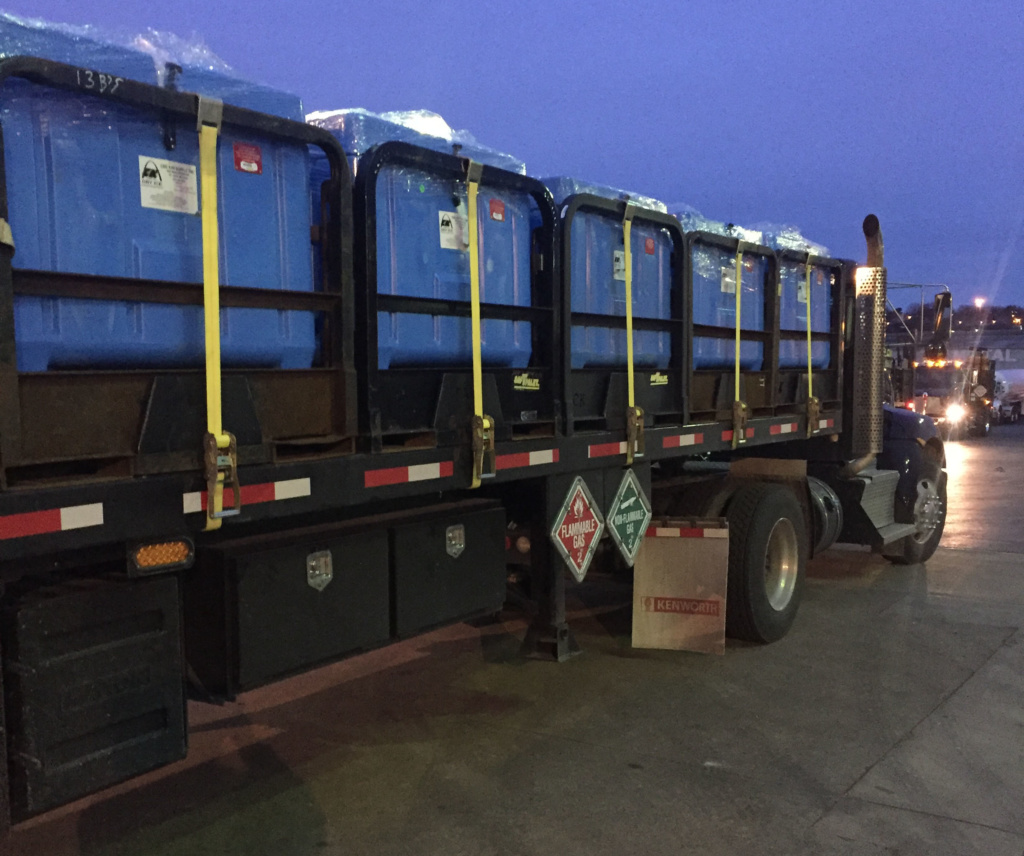