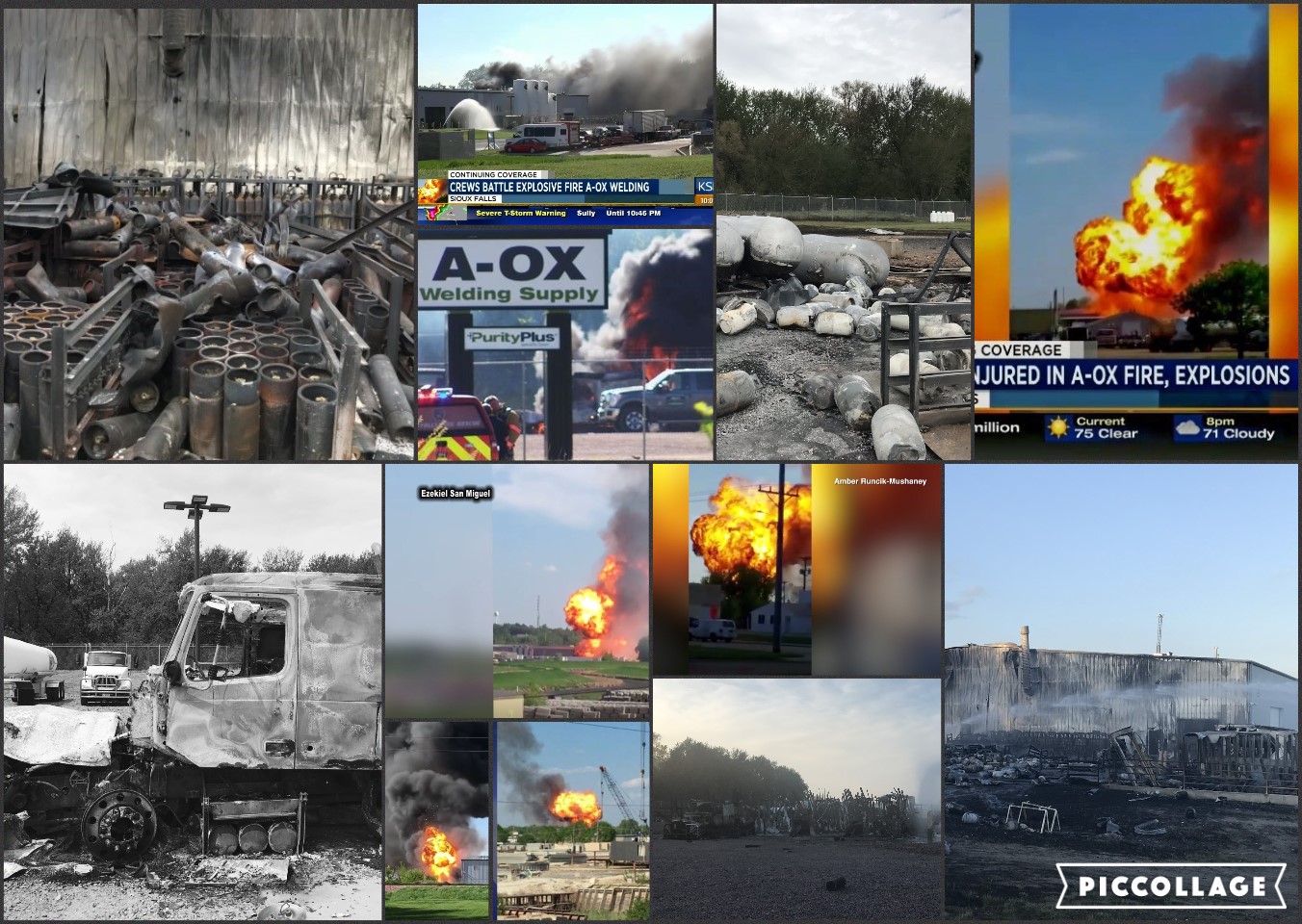 According to the United States Department of Labor Occupational Safety and Health Administration (OSHA), 5,250 workers died on the job in 2018, an average of more than 14 deaths every day. It is a tragedy that nobody wants to think about. But a good company must be prepared for how to respond when tragedy strikes.

Tragedy, of course, can take many forms. It does not necessarily need to be a worksite death, as cited above. It could be a non-fatal accident (2.8 million nonfatal workplace injuries and illnesses reported in 2018), or a natural disaster like a fire, earthquake, hurricane, flood, etc. Companies must not only be prepared with a plan to continue operating after an event like this, but also with how to help employees cope with the tragic event.

When a workplace fatality or a natural disaster strikes, it is not only the injured party who suffers. Other employees in your company are impacted. Customers and suppliers are potentially impacted.

According to an article entitled 8 Effective Strategies for Supporting Employees After a Disaster by Joanne Crossland, “Although it may be tempting to crack the whip and get back to business as usual as quickly as possible, it’s best to avoid rushing stressed, traumatized employees back to work. They probably won’t be able to focus on their jobs until they have a handle on their situation, and they deserve the time and support it takes to get there.”

One of the most effective things that a company can do during a tragic situation is communicate frequently through multiple channels.

That communication can include information such as: What happened? How will the business be impacted? Will people’s jobs be impacted? “During and after a disaster, employees need to know what’s going on at the office and what’s expected of them,” Crossland says. “This can help them regain some sense of normalcy when their world is turned upside down. Use every channel available, including company-wide and department-level emails, messages posted on your company intranet and internet sites, communication apps, texts, social media accounts and even signs posted onsite. Using multiple channels simultaneously helps you reach people wherever they are, which can vary in a disaster, depending on the availability of power and access to desktops or mobile devices.”

These tragedies can happen to any company at any time. Unfortunately, many GAWDA members have learned that lesson first-hand. When tragedy does strike, it’s important to have a plan in place for how to handle it, both in the immediate aftermath and in the long-term.

We spoke with two GAWDA Members, A-OX Welding Supply Company, Inc. and Uniweld Products, who both experienced major fires at their facilities, about how they were able to cope with the disasters and keep their business intact. We thank both companies for their participation. 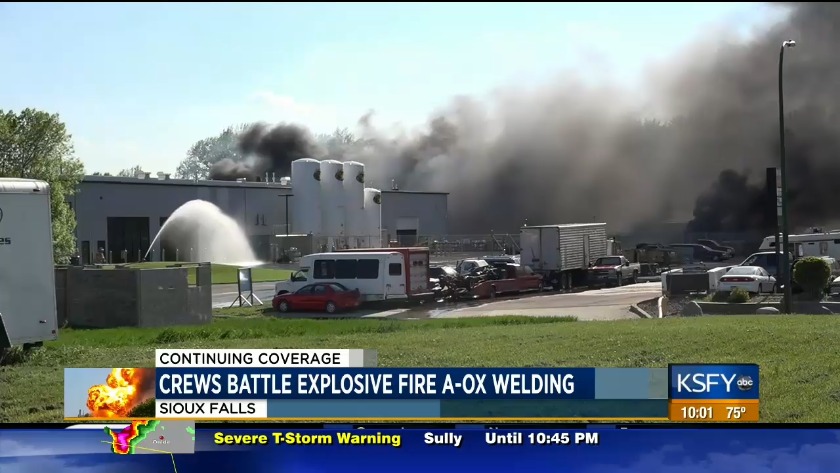 Those who attended the 2019 GAWDA SMC in Minneapolis, Minnesota, will no doubt remember the incredibly moving presentation given by A-OX President and Owner Thomas Elliott. Elliott described the massive fire and subsequent explosions that consumed the A-OX propane cylinder filling area on May 17, 2018.

“One of our employees was filling propane and while he was doing this, he was unaware that the propane was pooling around the tanks,” says A-OX CTO/Business Development Manager Trenton Elliott. “As he reached for another propane cylinder, he brushed up against a pallet that was made out of plastic, which produced a static discharge igniting the propane pooling beneath the cylinder.”

Soon after, the entire pallet was engulfed in flames and not long after that, the entire flammable gases area was consumed. To see security footage of the incident and how quickly the inferno got out of hand, visit the GAWDA.org Members-Only area.

“We were so fortunate that no one was hurt,” Elliott says. “The damage was substantial. We lost all our flammable cylinders. The fire ruined the exterior of the building but fortunately didn’t penetrate the building. The exterior damage caused us to temporarily shut down our reconditioning area. We lost 2 semi-trucks, 3 tractor trailers, and a few vehicles.”

All told, the total damage from the fire cost A-OX $2,236,000, without accounting for the opportunity cost of time devoted to the cleanup and recovery that was not spent selling. And even with all that, A-OX considers itself lucky.

“We were fortunate that the fire didn’t penetrate into the building,” Elliott says. “Because of this, we were able to resume pumping operations the next day. However, our blasting, paint, hydro, ultrasonic testing facilities were all down.”

For A-OX, communication was key.

“In the immediate aftermath, a lot of our customers were calling us. First to show their concern for us, and then to learn how it would affect them,” Elliott says. “Because it created such a spectacle, naturally there was media, state and federal agencies asking numerous questions. I would recommend designating one person to speak with them.”

Through it all, A-OX didn’t lose a single employee.

“Our employees were shocked that this happened,” says Elliott. “But, fortunately, they all rallied around us. I credit this mostly to Dr. Terran Elliott Bergdale. She was instrumental in addressing everyone’s concerns, identifying how it happened and how we were going to keep it from ever happening again.”

Though A-OX continues to feel the effects of the disaster today, it has revamped many of its safety and training practices to ensure that nothing like this ever happens again.
“We no longer pump propane on site,” says Elliott. “We’ve ramped up our training to make sure our employees are as prepared as we can possibly make them. I recommend using the resources available to you from Propane Education & Research Council (PERC). We evaluated and made some changes to our record keeping systems to make sure that our data is safe and secure.”

He concludes, “I think it’s important to remember that things like this happen. If you’re prepared now, it will be easy to have faith that everything will work out later. I would also recommend leaning on your support structure, whether it’s family, friends or colleagues. You have to share this burden, one person can’t do it alone.”

Like A-OX, Uniweld Products, Inc. also endured a massive fire that could have crippled its operations. In September 1999, Uniweld suffered a catastrophic fire that consumed 45,000 sq. ft. of office and manufacturing space. Fifty years of office records, both hard copies and computer, were lost in a single evening.

“The fire burnt up all of our offices and all of our raw material and half our machines, but didn’t touch our assembly area or finished goods inventory,” said Uniweld Executive Vice President Douglas B. Pearl and President David S. Pearl II. “We lost all of our digitized records. We had so many good, honest customers and even competitors who helped us out.”

To this day, the cause of the fire is undetermined. The fire marshal speculates that it could have been caused by a lighting strike.

“Our insurance company paid out more than $10 million and we were down for months waiting for our new building,” says Pearl.

However, even without a building, Uniweld was able keep operations afloat in the meantime.

“After the flames were finally fully extinguished, inspectors had to do swab sampling around the inside of the building to determine if there were any toxic or harmful residues,” Pearl says. “After we got clearance to enter the building, we assessed our damage and prepared a flexible plan of operation on the fly. We were back with limited shipping within three days and back in full swing in about two weeks. Parts production became a critical element and we used every piece of equipment that we could muster and salvage to begin making parts. We moved our operation center to a family-owned building next door, and we began preparing a comprehensive insurance claim.”

To weather such a storm took a true group effort.

“Our employees were great. We kept everyone on at family expense and everyone was assigned tasks to accomplish. It would have been next to impossible to recover the way we did without our wonderful employees and insurance. Everyone stepped up and delivered,” Pearl says. “Even before the smoke cleared, one of our competitors was sending out faxes to everyone saying that they were ready to supply. All personnel were assigned specific tasks. Much of the work was information collecting from both employees and customers. Our insurance company was wonderful and very helpful. They helped us with the demolition and pre-re-construction issues. Most of our family of employees got over the shock quickly and we moved on to the task at hand.”

Uniweld celebrated its 70th anniversary in 2019, but it was very close to never achieving that milestone. The fire helped teach the company a valuable lesson and it has instituted new protocols and safeguards to prevent something similar from happening again in the future.

“Preparation for a catastrophe is critical for survival,” says Pearl. “Make sure you have adequate insurance coverage from a highly rated insurance carrier. Make sure your property insurance is at replacement cost value. Business interruption insurance is also a good idea. It is very important to have an up-to-date copy of ALL of your computer systems information away from your building in a safe deposit box. This way, if your computers are damaged, you can buy new hardware and upload all of your current information. Copies of ALL computer records must be stored off site in a secure location. Copies of mechanical drawings, if not computerized, should also be stored off site in a safe and secure location. When designing your disaster plan make sure you consider the least but plan for the worst. An up-to-date machine list and full inventory list is also very important to keep off site.”

In addition to keeping copies of all data off site, Uniweld has also changed the way some of its parts are manufactured and its compressed gas cylinders are stored.

Says Pearl, “Having a fully sprinklered building is an excellent fire deterrent. Once there is water flow, an alarm goes off and your alarm central station notifies you and the fire department. Having an approved building fire sprinkler system, will also reduce your insurance costs. Had we had a fire sprinkler system the damage to our facility would have been much less. There are companies that specialize in assisting companies with disaster plans, they are experts and can assist you if necessary.”

How to Overcome a Loss
2020 MEMBER ANNIVERSARIES: 80 YEARS