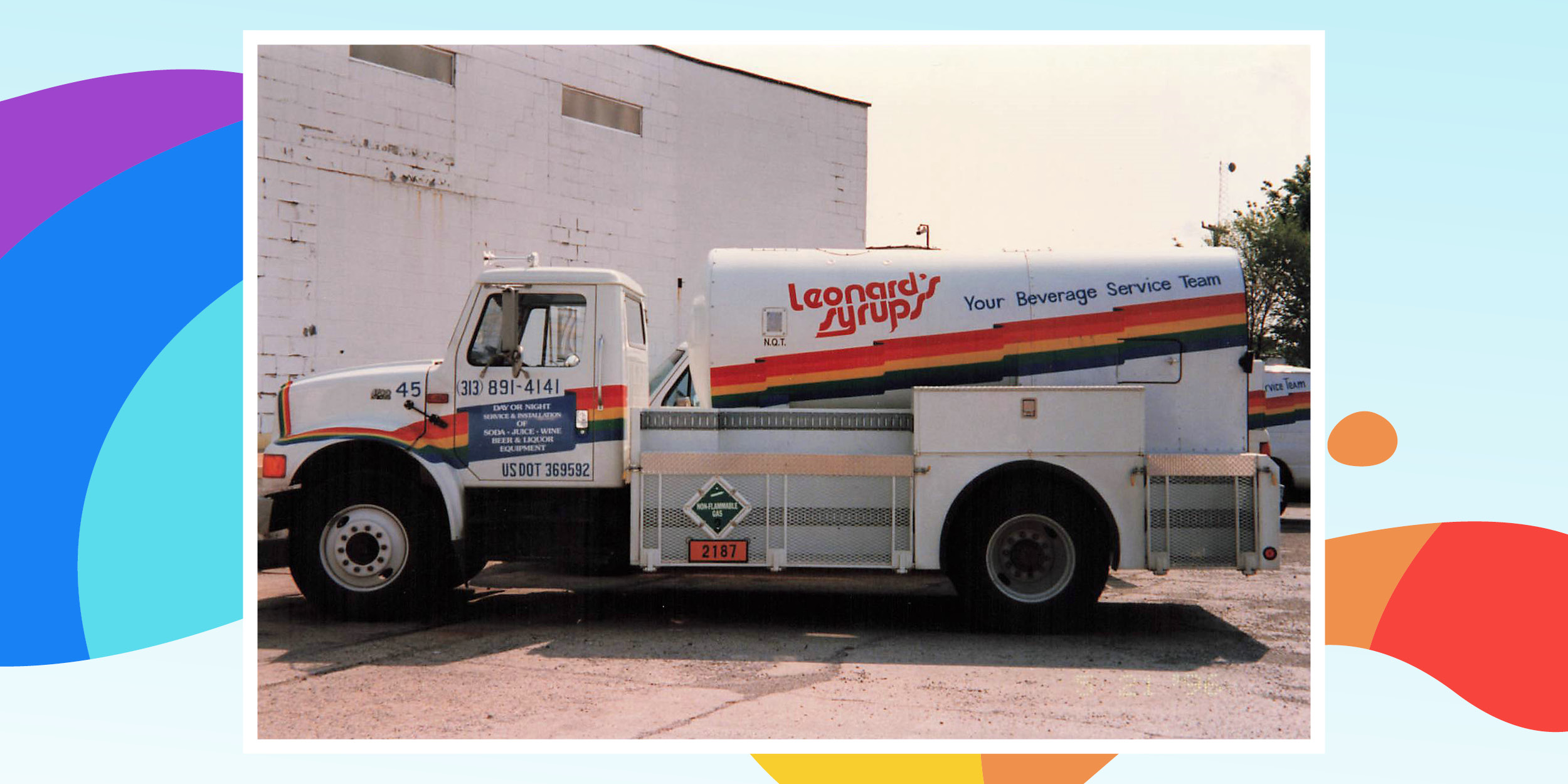 Making Their Customers’ Cup Runneth Over

How Leonard’s Syrups has become a one-stop shop

While Leonard’s Syrups was technically founded in 1965, the origins of the company stretch back much, much further than that, to a college dorm room in Columbus, Ohio. When Leonard Bugajewski Sr. was enrolled at the Ohio State University, he got the idea to open his own soft drink bottling brand. During his junior year, Bugajewski and his roommate left Ohio State to open the Clio-Cola bottling plant. The company, however, was short-lived, and was dissolved in 1940 due to the product label and name being too similar to Coca-Cola. However, while the company was shut down, Bugajewski’s passion for the industry was not extinguished.

Leonard Sr. returned to Ohio State and received his degree in 1942, before serving in the Navy. In 1946, he started a Pepsi-Cola bottling plant, which was purchased by the Pepsi parent company in 1951. From there, Leonard Sr. joined the Vernors Ginger Ale Company’s Buffalo, New York, branch before moving to Detroit in 1956 to become a National Sales Manager for Vernors. After fighting for funding for the company’s syrup division, he decided to resign in 1964.

That fall, he conceived Leonard’s Syrups as a division of Mavis Bottling Operations, before spinning the company off on its own 1965 after his son, Leonard Bugajewski, Jr. graduated from the University of Michigan. From the start, Leonard’s Syrups has always been a family affair, as Leonard Sr.’s wife, Irene Bugajewski, worked with the company on weekends doing the books, while Leonard Jr.’s wife, Jean Ann Bugajewski did the customer invoicing and collections. Leonard Jr. had his degree in Forestry/Chemistry, so he worked as the company’s flavor chemist, manufacturing the soda using flavors from Foote & Jenks. Soon, he realized that he wanted a more unique flavor, so he started consulting with the head flavor chemist at Foote & Jenks and a lifelong friendship and consulting partnership was formed. To this day, Leonard’s still makes their own flavors.

Leonard’s Syrups’ growth and evolution has been dictated, in large part, by the changing habits of the American consumer.

“In 1964, going out to eat was something that people did maybe once per month,” says Leonard’s Syrups Vice President Sherri Iskra. “Typically, office and factory workers brought their lunch from home. Fast-forward 30 years and eating out daily is commonplace. There are thousands of fast-food restaurants across the USA.”

While the company made its name with its syrups, it really began to explode in the mid-90s with an investment in Bulk CO2.

“That was one of the largest changes ever for Leonard’s Syrups,” says Iskra. “That made continuous carbonation a possibility for bars and restaurants. The investment to dive into Bulk CO2 was large, and we felt it was risky, but we are so glad that we made the leap.”’

Bulk CO2 has become such an integral part of Leonard’s Syrups’ business that it keeps 582,000 pounds of CO2 on-site at its Detroit location in seven above ground tanks. With the recent CO2 supply chain issues, Leonard’s Syrups has ensured that it will always have enough CO2 on-hand to service their customers, no matter what happens.

In fact, bulk CO2 has been such a major part of the company’s business that it has expanded its application beyond the beverage industry.

“We are fortunate enough to have branched our CO2 division into other areas, such as fire suppression and swimming pools,” says Iskra.

This was fortuitous, as the consumer evolution that drove Leonard’s Syrups to invest so heavily in Bulk CO2, has now begun to swing the other way.

“A major change recently has been the health craze,” Iskra says. “People are demanding healthier choices, and not purchasing as much soda for their home. COVID caused yet another change, as restaurants were closed for a very long time, and when people order carry-out, they seldom order a beverage to go with it. This caused a major dip in soda sales. However, because of our diversification, we were able to stay afloat with our Bulk CO2 sales. And now, even with the health craze, when people are out, they tend to make exceptions, and will order the soda.”

She continues, “Recently, restaurants have begun to move away from high-pressure cylinders. They have high turnover, and they don’t want to train each new person how to change the high-pressure gas cylinder every time they are empty. They really want the continuous carbonation that Bulk CO2 provides. Leonard’s keeps bulk tanks in stock at all times, so we are able to do an install within 24 hours of a customer calling.”

Today, the company stives to be the one stop shop for all beverage needs. Leonard’s Syrups can provide the full installation of a bar or restaurant’s beverage system beer system, bulk CO2 system, ice machines and all soda and juice products. The company continues to diversify, something that has been a hallmark of the fourth-generation family-owned company since its inception, as it has recently added blend gas, oxygen, and helium to its repertoire.

“Leonard’s Syrups is committed to being recognized as the leading full-service supplier of beverage products and beverage dispensing solutions in the State of Michigan. Our team is dedicated to providing an exemplary customer service experience and the highest-quality beverage ingredients to assist our customers run their businesses more effectively and efficiently. Our team members are the heart of Leonard’s Syrups, and we treat them as we would a valued customer. We are a team of hardworking, passionate professionals who truly care about the customers we serve.”

The company’s mission statement says it all. And to achieve the lofty goal of becoming the leading full-service supplier of beverage products in the state of Michigan has required buy-in from all levels of the company.

“Culture is an important foundational piece to the structure of our company,” Iskra says. “We believe in promoting from within and ensuring that each one of our team members has every tool they may need to succeed. Our culture is formed in the belief that anyone is capable of achieving high levels of success and satisfaction with their work. We maintain an open-door policy where any team member is welcomed and encouraged to express opinions or concerns. We believe this helps foster a culture of transparency and integrity to help set us apart from our large competitors.”

In addition to its open-door policy, the company has benefited greatly from its continuity of leadership and consistent ideals since its founding. Co-Founder Leonard Bugajewski, Jr. continues to be an active CEO, while his wife and original employee Jean Ann Bugajewski also continues to be an active participant in the business. Their son, Leonard Bugajewski III serves as the company’s president, while their daughter, Sherri Iskra, serves as Vice President. The late Stephen Bugajewski was integral to the company’s product development and marketing. The fourth generation of the family is now active at Leonard’s Syrups, as Lucas Iskra is the company’s head of business development and Mark Iskra is the company’s resident “jack of all trades” working across numerous departments to ensure continuity and maintain company standards.

Leonard Jr. built a reputation over his time in business for his integrity and generosity.

“It’s Leonard’s philosophies that still drive the company,” says Iskra. “They are built upon helping both our customers and our team members succeed at all costs. It’s no mistake that the Leonard’s Syrups brand started with nothing but a father, a son, and a delivery truck and is now recognized all over Michigan. Leonard Jr.’s classic family values and traditional business ethics have set us apart from our competitors since 1964. Leonard believes that at the core of our business is our team and if any individual is willing to work hard, then they deserve a chance to prove themselves. “

Leonard Jr. was fond of saying, “Our customers deserve the very best service and highest quality products. Period. Anything less is unacceptable.”

Says Iskra, “We pride ourselves on same-day service if a customer has a problem.  Leonard’s offers after hours and weekend service, so if you run out of product or gas, or your draught beer system goes down, we are able to be there within two hours.  This really sets us apart from the ‘big guys.’”

“The future of Leonard’s belongs with the younger generation,” says Sherri. Two of the six grandchildren in the fourth generation are currently working full time helping the company grow, and there are four more waiting to succeed and give the service and attention to the family restaurants they serve.   The fourth generation is looking forward to expanding and building upon the solid foundation that has been established during the past 68 years. Our customers realize only a family supplier knows how to relate and serve a family business ‘like one of the family.’”

In recent years, Leonard’s Syrups has made a real effort to “future-proof” its business. This included large capital investments including: purchasing ten Ford Fiesta’s for the company’s beer coil cleaning department; purchasing eight Dodge Rams for the service department; upgrading its plant to save energy and provide a safety and healthy work environment for its employees.

In addition to those changes, the company is putting time and effort into its online presence.

“Customers prefer to do business on their time,” Iskra notes. “They want online ordering, online bill pay, online everything! In 2022, we are rolling out our webstore, where customers can place orders, place service calls, see and print their outstanding invoices, make payments, such us a message, and much more.”

She continues, “We are using telemetry more and more on our Bulk CO2 vessels. Customers have an app that they can log into to view their tank, see the pressure of the tank, see how full/empty the tank is, etc. We are constantly thinking of how we can utilize technology to make the customer interface easier and less time consuming for our customers. We just implemented bar codes on all of our high-pressure gas cylinders, so we are able to track the lot number of the gas in each cylinder, see the history of the cylinder, and automate the monthly rental process of the cylinders.  It is nice for the customer to see the exact serial numbers of all cylinders that are on their property that they are paying rent for.”

As Leonard’s continues to diversify its business, it has made the investment to become members of the International Beverage Dispensing Equipment Association (IBDEA), as well as to become more visible in the GAWDA community.

No matter where the future takes Leonard’s Syrups, it will always remain devoted to the foundational pillars set forth by Leonard Sr. and Leonard Jr. 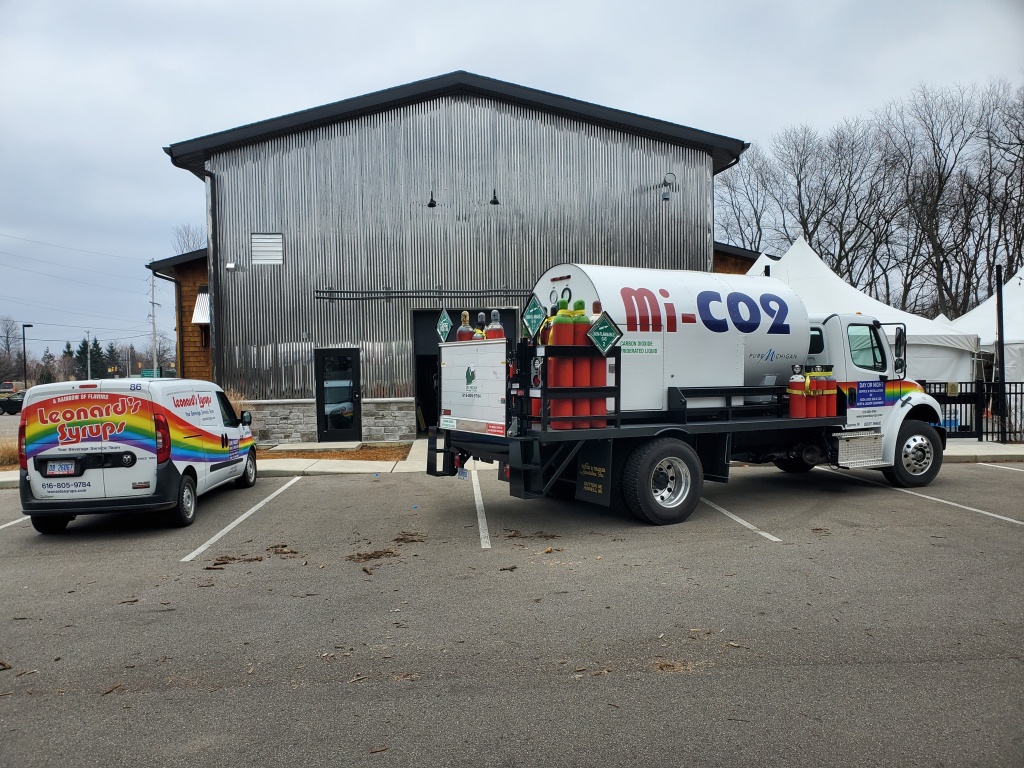 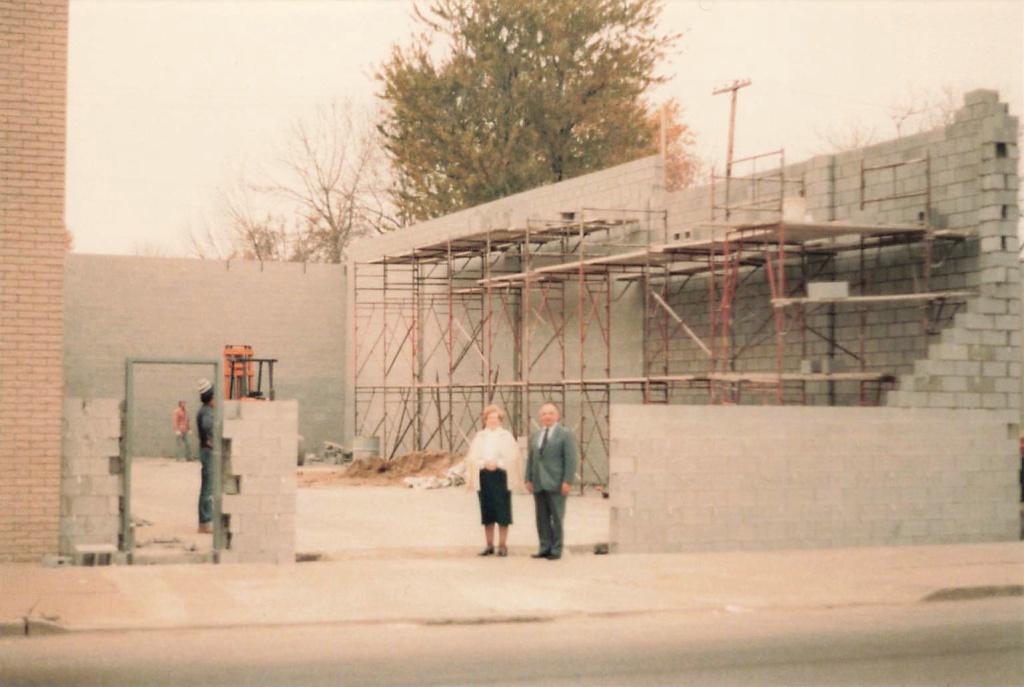 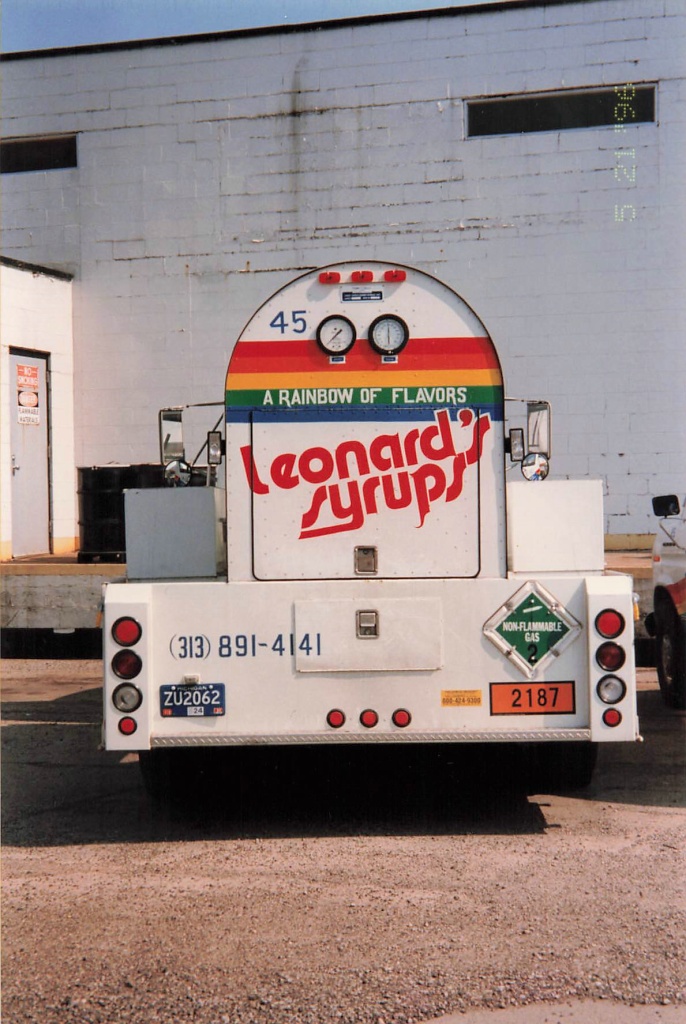 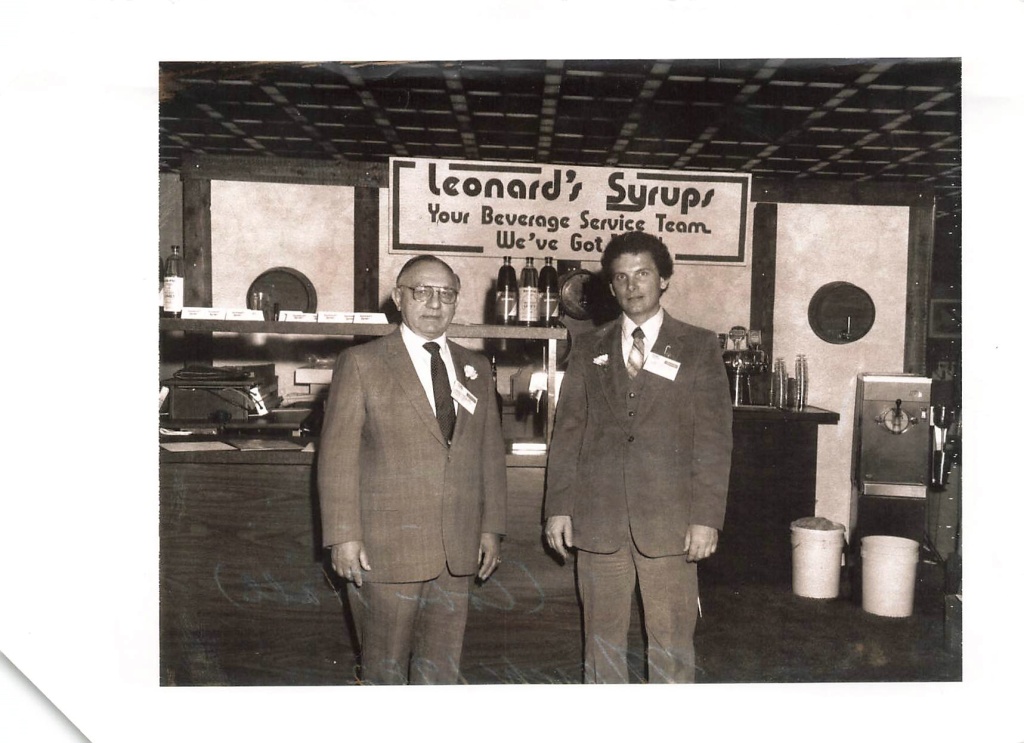 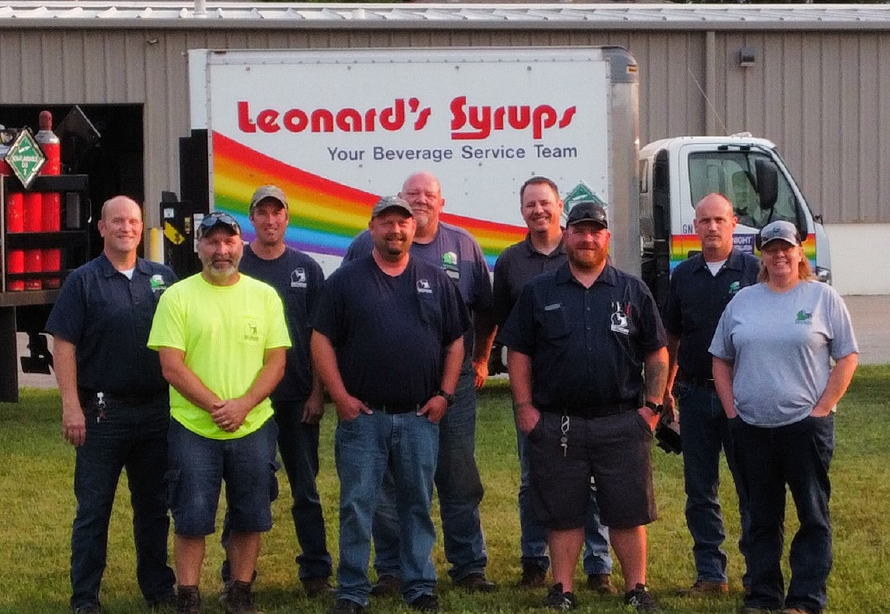 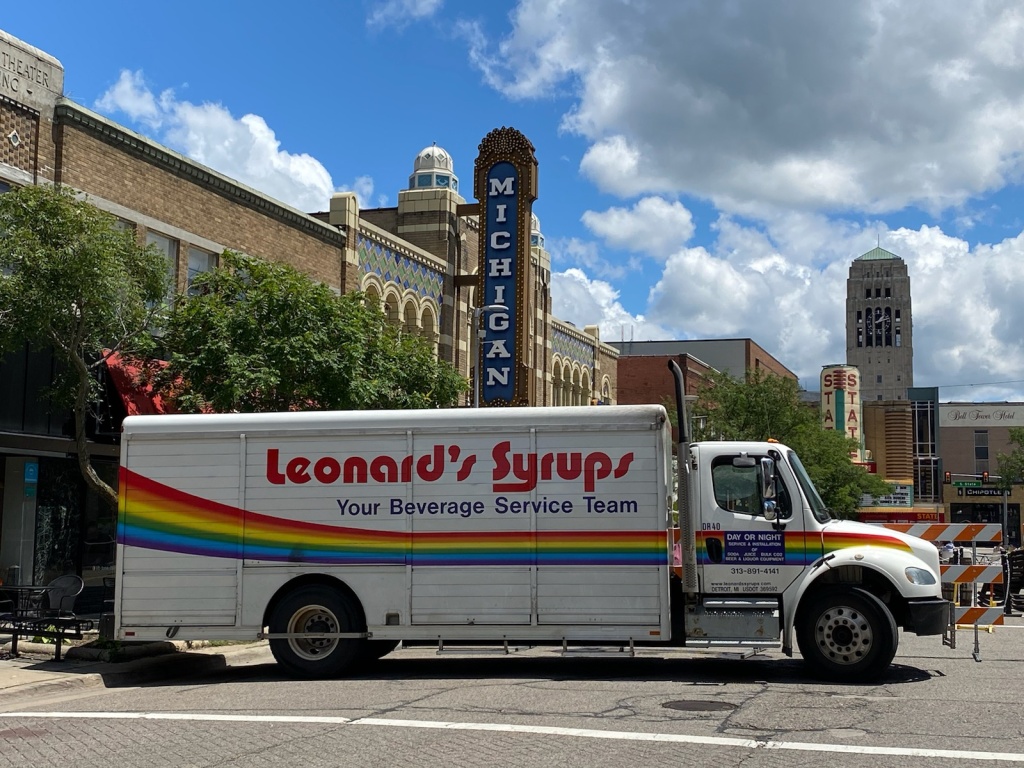