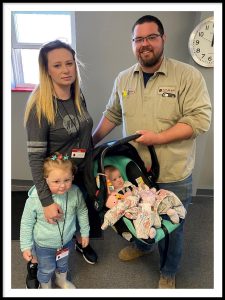 The Butler Gas Family is thrilled that Branden Kiefer has accepted an expanded role as Operations Manager at its production and distribution hub in McKees Rocks, Pennsylvania. Branden joined the Butler Gas team in December with 11 years of industry operations experience. He was hired for a management track, and the successful completion of his onboarding program coupled with his teamwork mentality and work performance made this formality a no-brainer.

Since joining the Butler team, Branden has been focusing on cylinder delivery dispatch, order fulfillment, yard organization, and industrial and medical gas filling. In his new role, he will be expanding his focus to learn specialty gas, and overall driving safety and efficiency culture throughout all areas of McKees Rocks operations. McKees Rocks is a three-structure facility housing industrial gas production, medical gas production, specialty gas production, bulk distribution, and cylinder distribution.

In a company news release dated May 23, President and CEO Abydee Butler Moore shared, “Thank you for choosing Butler Gas, Branden! From all of us, we are excited to support your success as you lead our team to be the region’s best gas manufacturer and distributor.”