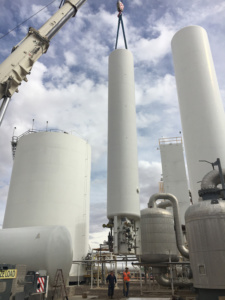 Removal of the Coldbox in Texas. (RCI photo)

Efficiency is always the name of the game when you’re an air separation plant construction and relocation specialist, but some jobs require extra effort. That was the case earlier this year when Ranch Cryogenics, Inc. landed a contract to move an idle nitrogen generator from Texas to South Carolina.

RCI, based in Dwight, IL outside of Chicago, signed contracts at the end of January and was tasked with having the plant moved and up and running in its new location by April 1. An RCI crew started with a kickoff meeting at the Illinois office on February 2 and was onsite in Texas two days later to start work.

A month later on March 2, the plant was packed up and ready to ship.

“It’s pretty unusual to have it done in that amount of time,” said Mike Duffy Jr., RCI president. “They needed to be able to start supplying product by April 1, and that’s why it was such a tight schedule. We planned on working seven days a week, but it turned out we couldn’t work on Sundays. So that made it even more difficult.”

Time tables vary with each project, but they’re ordinarily a little more flexible—often from four to six months. “Two months is the tightest schedule we’ve had to work with,” Duffy said. “I literally drew out the layout in my Notebook and then we built it off of that.”

It worked to everyone’s advantage that the company had just hired Phil Sullivan, a 28-year welder-pipe fitter and repair veteran who was named construction manager for the project.

“Phil was there the whole time and really got things done,” Duffy said. “There was only a crew of five for RCI and three to four for a lot of it.”

March turned out to be cold and wet.

“It was challenging because we had to lay everything out from Point A to Point B,” he said of the Texas portion of the job. “Then we had to pack everything up and be ready to start installing it.”

“Tearing down is easier than putting it back together. You have to take care of the equipment when you’re taking it apart, but I thought that went pretty well.”

“It was a tight schedule, but I’m used to it because of my past history. I used to do Coldbox emergency repair jobs all the time and it was always go-go-go. So it didn’t faze me much.”

The relocated plant was mechanically and electrically complete by March 30. But there were a couple of hurdles on the customer’s side—they had trouble getting the control system updated and communicating. Also, an air compressor factory representative wasn’t immediately available for machine commissioning.

Start-up occurred on April 10 and by April 13, the plant was running and making purity. For more information, call Ranch Cryogenics at 815-584-9161.

The newest branch has high visibility and an experienced team that is ready to serve the gas and welding industry. Branch Manager Tim Ervin is ready to take on day-to-day sales and delivery needs, while providing the best customer service. Account Manager Kyle Jordan directs his focus towards new customer acquisitions and AWG brand awareness. Their knowledge of gases and products are a valuable asset in this marketplace.