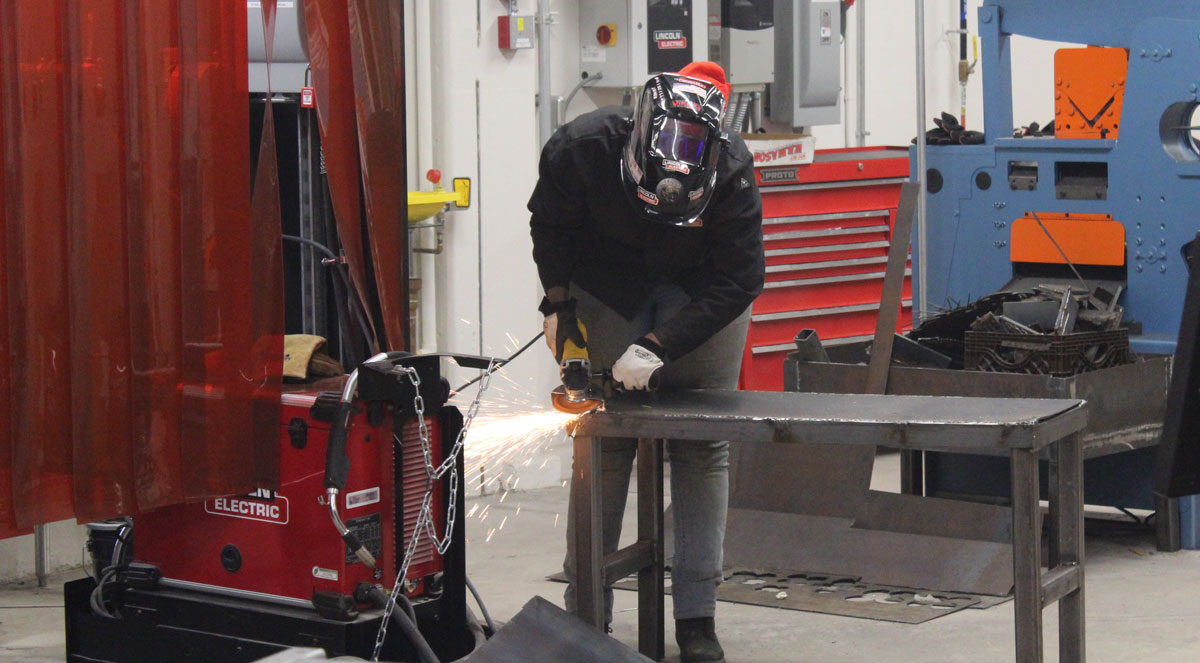 The “skills gap” is an issue that all companies in our industry, as well as many of our customers, face every day. The nation-wide shortage of qualified welders and fabricators is certainly not a new phenomenon. We discussed what many GAWDA members are doing to address this issue in the spring issue of Welding & Gases Today, in an article entitled “Attacking the Skills Gap.”

Today, a high school in Syracuse, New York, is doing its part to prepare students to fill that gap. Corcoran High School last year introduced a welding program as part of its 27 Career and Technical Education Programs. And this year, interest and participation in the program has skyrocketed. 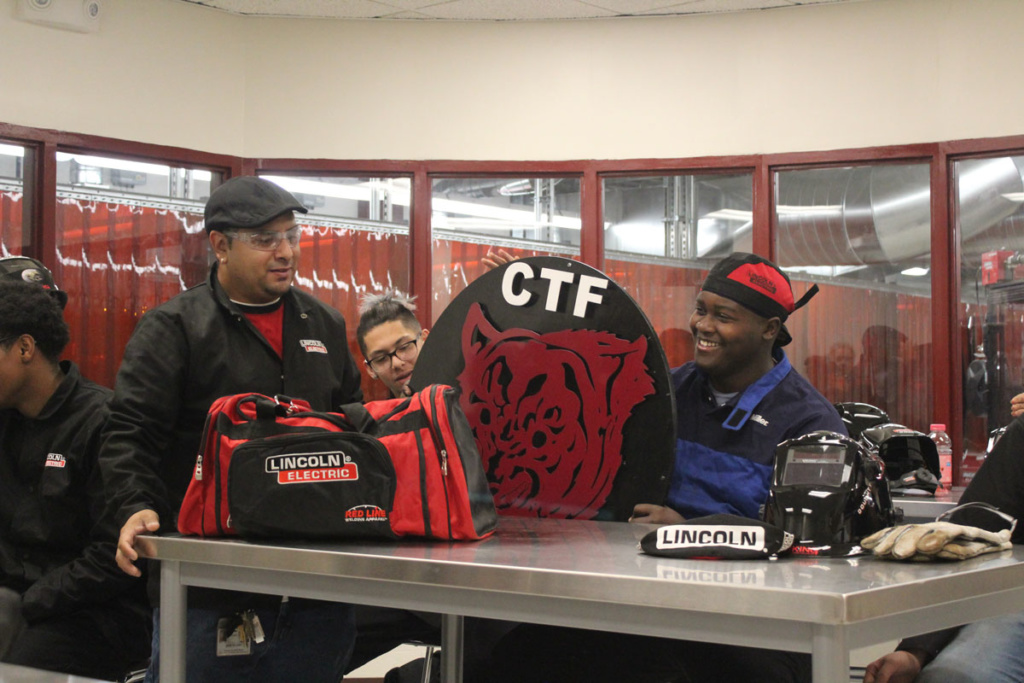 Instructor Jose Ocasio said during the last week of September alone, five students interviewed for the school’s welding program. Part of the draw is certainly the new, state-of-the-art lab that the school completed over the summer.

“It’s this incredible thing that all of a sudden there’s a boom of excitement for welding,” says Nick Lisi, the Business and Higher Education Liaison for the Syracuse City School District’s Career and Technical Education programs. “Who would have ever thought? But it’s happening. It gives you chills to think about. Before this program, students really didn’t know about this as a career path. But now that they know about it, they’re excited about it. And there’s a pathway to jobs. And there’s excitement from businesses for the students. It’s the perfect marriage.”

Ocasio – a former instructor at Mohawk Valley Community College – says that as far as he knows, this is the only high school welding shop of its kind New York state.

The shop officially opened its doors last May after two years of construction. During that construction, members of the program were transported to the Johnson Center in downtown Syracuse, to practice welding. Some of those students were able to get their first look at the lab during a six-week bridge program over the summer.

Lisi says the lab was built, in part, because there is a need for welders in the Syracuse community and beyond.

“Businesses are reaching out to us; they’re not shy,” Lisi says. “They see a pipeline from our program to their businesses. They are seeing our students as their potential next employees. We meet with businesses regularly and they’re all saying the same thing: they have employees that are retiring, and they have no one there to fill that void. That really has been the motivating factor to get these programs going.”

Ocasio says the need for welders is especially high in fabrication and manufacturing. Cal Manning – who has been a welding instructor at Haun Welding Supply for the past nine months – says that local companies are always looking for welders.

“It’s going to be huge, getting these kids familiar with the industry and understanding it,” he says of the new lab. “I think it will really help the industry.”

The Syracuse City School District provided all of the funding for the lab and equipment. However, they partnered with the Lincoln Electric Company to help identify the best welding equipment and gear for their students that would help make this a state-of-the-art program. That partnership provides Corcoran with access to some of the company’s newest machinery and also to numerous other resources, including manuals and additional education for instructors.

For Ocasio and the Corcoran Welding Program, that partnership with Lincoln has gone beyond input on products and access to equipment.

“In my experience, it’s hard to get manufacturers on the phone if you need something,” Ocasio says. “But having a partnership with Lincoln, we can call their rep and they will come in and quickly help identify what might be wrong with a given machine and suggest solutions on how to fix it.”

Each student in the Corcoran Welding Program is required to provide three things: jeans, a shirt and steel-toed boots. The school supplies the other necessary equipment, giving each student a duffel bag that contains a helmet, bandanas, gloves and a jacket, all of which are purchased from Lincoln Electric. And Lisi says this is the same safety equipment a welder in the field would use.

“In all of the CTE programs in Syracuse, [Director] Bob Leslie wants students to use the same equipment that’s used in the field,” Lisi says. “Students that are using Lincoln Electric could go to G.A. Braun (a manufacturer in Syracuse), and they may see the exact same Lincoln Electric welder.”

As Corcoran underwent construction over the summer, the new welding lab caught the eye of some of the workers. “It’s like their dream shop,” Ocasio says. “They come in, they look at the machinery and they’re like ‘Oh wow!’”

A converted technology room and office space, the welding lab features the newest machinery that Lincoln Electric offers. Each of the 16 booths contains a multi-process welder, which is unique from the ones previously used at the Johnson Center.

“A lot of times, if you have a welder, you have to shut off that welder, plug in a different welder or plug in all the leads and take the leads off,” Ocasio says. “These welders already have all the processes built in, and they have software to them, so whenever you turn on the machine, you set which process you want and it will deactivate one plug and activate a different plug.”

These welders can do 453 different types of welds and are Bluetooth capable, enabling Ocasio to plug in his laptop and check a student’s progress that day, among other things. Each booth is also equipped with a state-of-the-art ventilation system. This allows Ocasio to talk to his students while they’re welding without shouting, something not normally possible because of the noise.

“Over the summer, we might have had 12-14 students all welding at the same time,” Lisi says. “I mean it’s a shop, but you could still have a conversation…It’s pretty amazing.”

Another unique feature of the Corcoran welding lab is the robotic arm welder, created to mimic those found in the auto industry. Students can also take advantage of the fully automated plasma table, which allows them to draw and transfer files to it, then cut them out.

For Ocasio and his students, the impact of the new lab has been immediate. 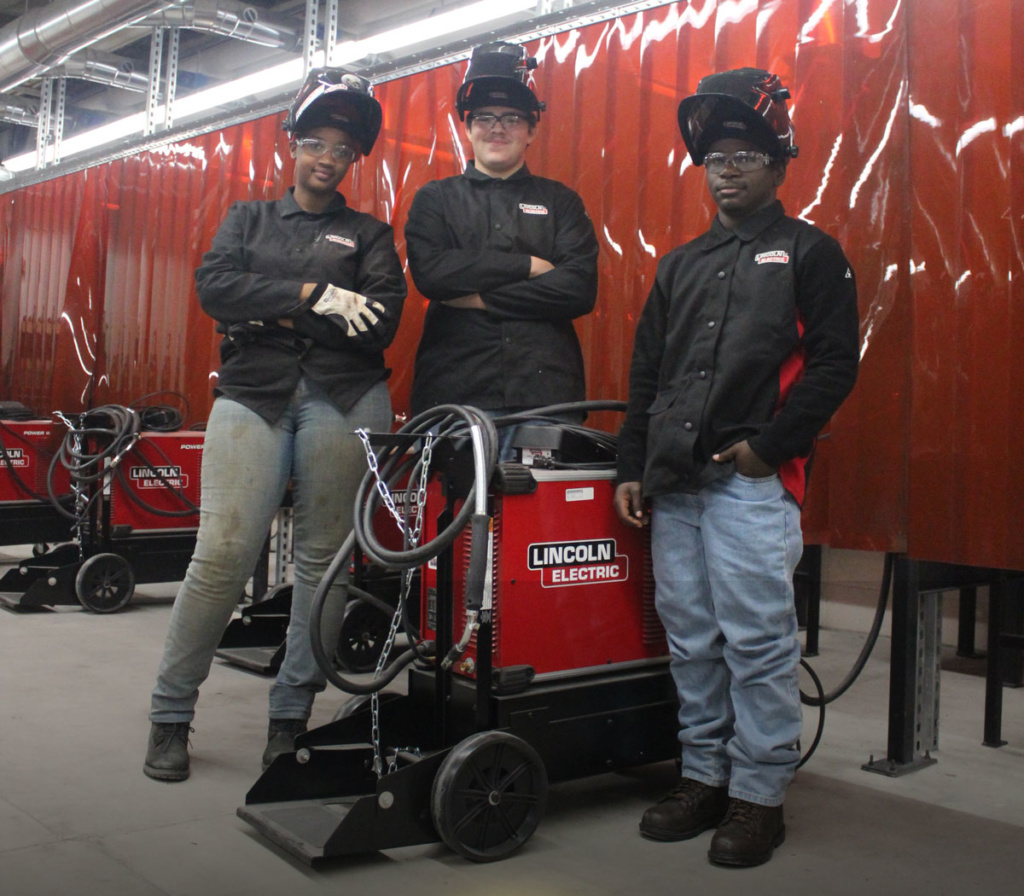 One of those students is Priscilla Jones-Johnson, who participated in the six-week welding program over the summer. She says, “I love welding. Just being inside a booth and as you work in there, actually being able to do things that most people can’t imagine doing, that just excites me and motivates me to do better for myself. Right now, my life is welding, that’s how I feel. Everything I’m trying to do is going towards that goal.”

That goal, for now, is to become certified in different types of welding, but Priscilla hopes to own her own business one day. “[The welding program] has prepared me a lot,” she says. “At this point, if I really put my mind to it, I can go anywhere. I’m pretty sure a lot of people in high school can’t say that.”

The welding program provides an avenue for students to become certified and prepared to enter a vibrant and viable industry that thirsts for new blood and new ideas.