The COVID-19 pandemic has been an incredibly trying time for our nation and our industry. Though many GAWDA members remained open in some capacity throughout the crisis as “essential businesses,” there isn’t a single person or company who hasn’t been affected in one way or another. Even the association has been impacted, as the difficult decision was made to cancel the Spring Management Conference as well as all 2020 Regional Meetings in an effort to keep members safe. Through it all, GAWDA members have been there to lend a hand to those in need during the crisis.

The following are a sampling of stories and social media posts related to how GAWDA members have given back during this time of crisis. If your company has a story that they would like to share on GAWDA Media.com or on the GAWDAMedia Buyers Guide, please email [email protected] and I will make sure that it runs both on the website and in the bi-weekly GAWDA Connection. For a list of GAWDA Resources relating to the COVID-19 pandemic, including the GAWDA COVID-19 Consultant & Member Roundtables,
visit gawda.org/covid-19. 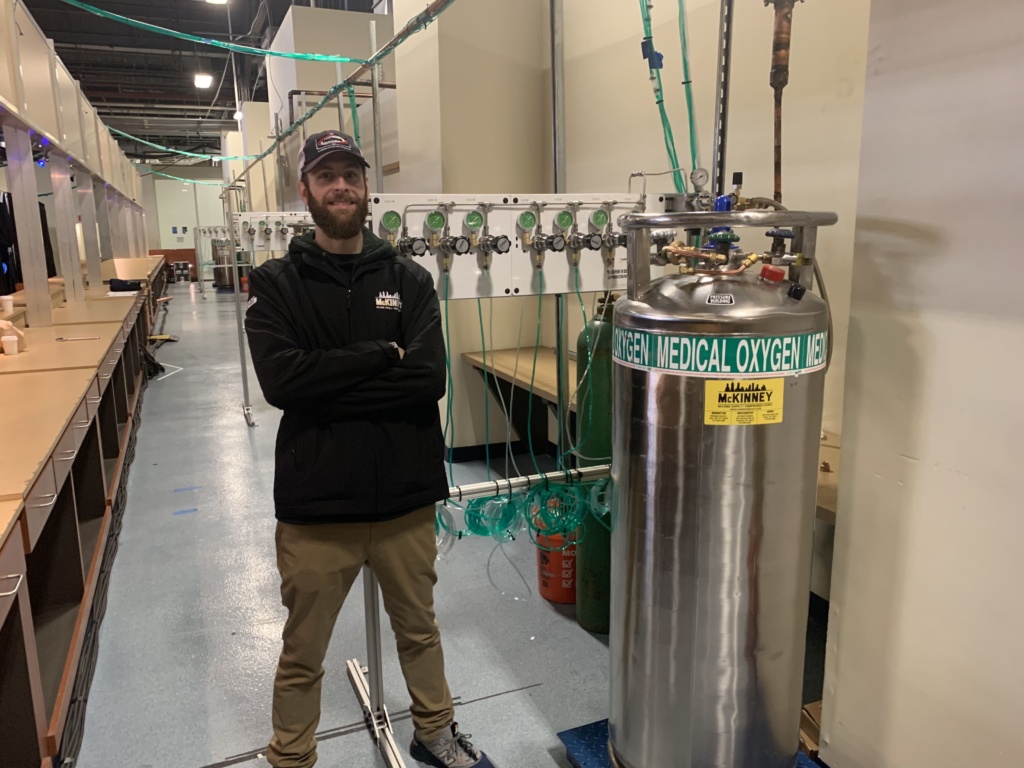 Dan Mattiace, General Manager of McKinney Welding Supply, is photographed in front of dewar tanks at the Brooklyn Cruise Terminal.

The Harris Products Group has been a vital partner to contractors and their gas suppliers as they raced to fulfill demands at medical care centers and alternate care facilities for the treatment of COVID-19 patients. Within weeks of the outbreak of the coronavirus, Harris had produced and supplied thousands of critically needed medical regulators and hundreds of gas systems to distributors throughout the U.S. who were scrambling to meet critical needs.

One successful project involved a collaboration with McKinney Welding Supply, a distributor of compressed gases that has served the New York area for more than 70 years. As McKinney rushed to respond to the urgent need for oxygen delivery systems, the company turned to Harris for custom solutions for two New York City field hospitals. Working with McKinney, Harris designed, produced, and delivered systems with 78 panels and 1,170 regulators to serve the needs of 1,092 patient beds.

The project began when Dan Mattiace, General Manager of McKinney, received a call from a contractor who needed oxygen tanks for a planned alternate care facility with 20-40 beds. McKinney was in the process of providing high pressure tanks when the contractor called back two days later and said they might increase the number to 120 beds. Then, a week later, the contractor announced they would be installing a field hospital in Queens in the Billie Jean King National Tennis Center in Flushing Meadows-Corona Park, and another field hospital at the Brooklyn Cruise Terminal, with a total of 750 beds.

With the coronavirus exploding in the area, healthcare facilities everywhere needed oxygen. Since the smaller oxygen tanks would not be available, McKinney contacted its bulk gas supplier and then developed a plan to pipe the oxygen throughout the buildings and regulate the pressure at each bed using flowmeters. He then realized he had a major problem, when their current medical regulator supplier said they could not provide regulators until June.

However, Mattiace then contacted Harris sales representative Joe Prunty, explained the situation and described the equipment that he thought he needed. With this information, Prunty immediately consulted the Harris technical support team who then provided another solution. Instead of regulating pressure at each bed with flowmeters, the technical team proposed accomplishing the task with a series of panels that would regulate the pressure near the oxygen source and then distribute it throughout the facility.

“This turnkey solution was perfect and a great use of resources,” said Mattiace. “We could pipe the oxygen supply right to the panels. Each panel would have 14 regulators that would provide oxygen to 14 beds. Harris quickly provided a CAD/CAM drawing of the design, I proposed it to the contractor, we went over it with their doctors, and they all immediately approved it.”

Once the solution was approved, McKinney and Harris focused immediately on the critical issues of producing and delivering the systems. Time was of the utmost importance, and Harris formulated a plan to ensure the project could move forward rapidly.

“We knew we were asking that they try to do the impossible,” said Mattiace. “Harris Regional Manager David Sprague did a fantastic job in coordinating the effort, and David Gailey and Tom Trame from Harris’ Specialty Gas Group, were outstanding with the technical aspects of the project.”

Despite all of the obstacles, he says, “Harris made the impossible possible.”

Harris responded to the challenges by redeploying employees to work on the project at their Gainesville, Georgia, facility, where its Specialty Gas Group is based and its medical-related equipment and systems are produced. They added production lines and called upon supply chain partners to find and provide materials expeditiously.

The plant ran multiple shifts, 24 hours a day, seven days a week. The contractor assigned drivers to pick up systems daily, taking them directly to New York so that the plumbers could begin connecting them into the main lines as soon as they arrived.

Mattiace was impressed and amazed at the speed at which the project moved. He had fielded the call from the contractor on a Thursday, by Friday he had the gas delivery system approvals, and products began arriving on Monday in Queens for installation. An independent third-party company tested the entire system after it was installed and approvals for medical use were obtained on a Thursday night. The facility began accepting patients on that Friday morning, eight days from when McKinney had received the first call.

He was also impressed with Harris’ ability to adapt as circumstances changed. At the Brooklyn Cruise Terminal, a shortage of bulk gas trailers for the oxygen could have been a problem. However, Harris suggested using dewar tanks attached to a back-up supply from high pressure tanks. With this solution, McKinney was able to supply the equipment and connect it with the panels and hoses and avoid delaying the start of the project.

“From top to bottom, everything about working with Harris was great,” said Mattiace. “I can’t believe how much we accomplished in such a short time. I called Harris staff at all hours of the day and night, and their phones were always on. They were extremely knowledgeable and responsive to all of our needs.”

Harris staff is proud of their role in providing a solution to meet the needs of those providing care to COVID-19 patients and has high praise for McKinney and Mattiace. “McKinney is a great partner, and Dan’s attention to details, fast response to his customer’s demands, and his ability to communicate all the important information were important factors in the successful outcome,” said Sprague.

Along with McKinney, Harris has been tirelessly working with its other distributors to meet their business demands during this challenging time. They have delivered thousands of medical regulators and hundreds of medical gas systems for healthcare facilities battling the pandemic.

“COVID-19 has been a heartbreaking tragedy, but it is inspiring how our employees and partners are working together to overcome so many obstacles,” said Harris Products Group President David Nangle. “I am proud that Harris is using its knowledge and resources to design and deliver gas systems that are contributing so greatly to saving lives during this global crisis.”

A major player in the production of valves, Rotarex had to increase the activity of its medical branch in order to be able to meet the demand of hospitals and their needs for respirators in this period of health crisis.

Providing a breath of fresh air to hospitals has been Rotarex’s goal during the crisis. Specialist in valves for oxygen cylinders in hospitals – the Luxembourg firm has indeed seen its orders increasing, while the number of patients with COVID-19 in respiratory distress continues to increase across the globe.

Since the start of the health crisis, the production of the group’s medical unit has doubled. “We now produce 40 to 50,000 medical valves per month,” explains Paul Delecourt, marketing manager of the company which employs nearly 750 people in the Grand Duchy.

Based in Lintgen, Luxembourg, the Group sees requests pouring in from the countries currently most affected, both in Europe, from countries such as Italy, France, Spain or the United Kingdom, and also across the Atlantic. “We are also in talks with the United Nations regarding Africa,” said Delecourt.

A surge of solidarity

To meet demand, Rotarex Meditec therefore had to increase the production rate for the hundreds employees in the dedicated line, in particular by extending the working week through Saturday. Safety standards have also been strengthened and the production chain redesigned. For their safety, the employees, specifies the marketing manager, “wear masks” and have “more space”.

The Luxembourg company is also “proud to be able to contribute at its level” in this fight against the virus. Rotarex has also donated equipment to hospitals in the Grand Duchy, noting that “this gesture is priceless”.